We’re putting our #E2ToDo list out a day or so early, to make sure you get to see a couple of events that take place this coming weekend, & then we’ve peppered the rest of the list with plenty more festive goodness as we move closer & closer to 2019. The reality is that we’ll all spend a few quid over the coming weeks – so listed here are some of the better ways we can all go and do that in terms of supporting businesses & organisations that operate at a hyper-local level. Have a safe & peaceful December, & we’ll see you in 2019… 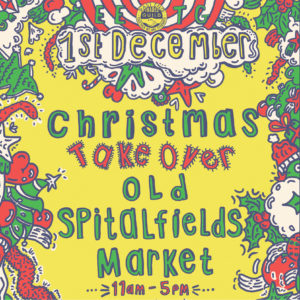 Shop independent this Christmas by joining members of the East End Trades Guild at Old Spitalfields Market on 1st December for a special one off pop-up showcasing the area’s best small businesses (for traders list click here). This is a celebration that neatly coincides with Small Business Saturday – a nationwide nod to buying local.

As well as picking up unique Christmas gifts on the day, you can pick up your free East End Independents Map- hot off the press – a celebration of all the independent businesses that form this unique blend of east end based enterprise.

Small local businesses from London’s East End don’t have the budget for the big billboards of the large global brands up West. So an alliance of 300 small businesses has created a map of their members so they can be made more visible in the run up to Christmas – & this Saturday also serves as the launch of the latest version of this map. Get down to support – this is proper localism!

“Driven by necessity, East Enders have always devoted themselves to invent ingenious and creative ways of making a living, defining East London as the centre of innovation and enterprise in the capital for more than three centuries – from the jacquard weavers of the eighteenth century to the code writers of our own time.

It is this enduring culture of resourcefulness which makes the East End such a vital place and which is championed today by The East End Trades Guild, cherishing our small shops and independent businesses” The Gentle Author, Spitalfields Life.

The celebrations also include a special performance from the Wing-It Singers at 1.30 p.m

Roman Road Market Square will be buzzing with festive fun this Saturday 1st. This event is a collaboration between Tower Hamlets Council and Tower Hamlets Homes, working together with local schools, community groups, partner organisations and residents. There will be lots on on the day, with bulb and tree planting at Meath Gardens, as well as an opportunity to meet Santa at one of his Grottos!

More info on what to expect on the day here.

Please join Live Art Development Agency as they host their first ever Festive Fair, with over 15 exciting stalls run by local artists, activists and social action groups selling art, gifts and tasty things, as well as promoting a range of campaigns around social and environmental justice.

In 2017, LADA moved to its new home at The Garrett Centre in Bethnal Green, a former Unitarian mission that began as a centre for social action in the late 19thcentury and continues to be a hub for working with local communities by housing arts, ethical and community focused groups.

The Festive Fair is part of LADA’s new developments for its new home and new neighbours in the East End.

All proceeds from the Festive Fair are retained by stall holders and reinvested into their work.

This brand new show stretches our E2 borders slightly, but features the full Bethnal Green based Grand Union Orchestra, celebrating not only Black British Music in east London, but the music of the whole of the African-descended diaspora.

This story began over 500 years ago, with the transatlantic slave trade, when millions of Africans were transported to Brazil, Cuba and the West Indies, and to the southern states of the USA. In horrific circumstances, they took their customs, their culture and their religion with them. Remarkably these survived in the New World, and above all their music has developed into an extraordinary legacy.

This is a story the Grand Union Orchestra is well-equipped to tell, with its core company including many musicians and singers of African or Caribbean descent. Several are first generation migrants themselves, but all of them fine exponents of their art – from West African drumming and chant, through Latin-American and Caribbean music to jazz.

This promises to be a seriously entertaining take on the Nativity story. It’ll feature a Community Gospel Choir, mince pies, carols & drinks, not to mention a real donkey!

This NYE Oval Space and The Pickle Factory join forces for a double-venue party befitting the magnitude of the occasion. Your ticket grants access to both venues, which hosts the finest DJ’s across the dance-music spectrum, accompanied by extra-special production flourishes.

Meanwhile across the road at The Pickle Factory, peerless German artist Move D holds it down for 6 hours. His longevity is testament to both his timeless productions from the early 90s to the present day, and his imitable DJ style. Not. To. Be. Missed.

Under a railway arch just off Bethnal Green Road hides…